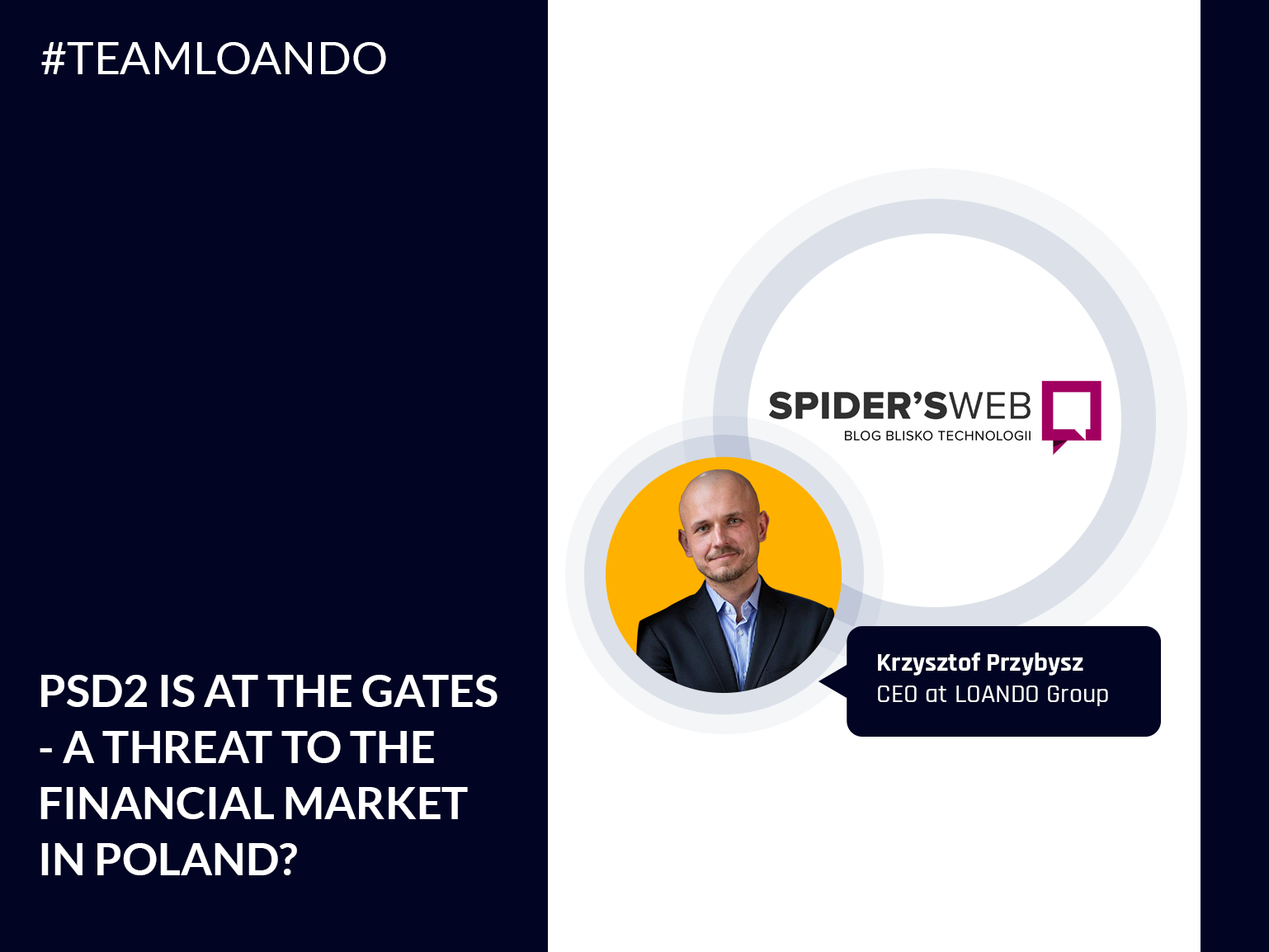 PSD2 is at the gates. Does the directive pose a threat to the financial market in Poland?

The PSD2 directive entered its implementation phase on 14 September. The purpose of implementing the new regulations is to level the playing field on the financial market and to open it to non-banking players. Warnings were voiced against changes in electronic banking, the return of screen scraping, GAFA entities establishing market domination or losses incurred by issuers. They are seen as negative consequences of PSD2.

Krzysztof Przybysz, LOANDO Group CEO, commented on this issue in a piece for Spidersweb.pl. In his opinion, the fears are rather exaggerated and the future is not going to be that difficult.
The European directive officially entered into force on 13 January. Until it enters the implementation phase, it is gradually being adapted to the applicable law and local requirements in individual EU member states. The most important change that the PSD2 will bring will be the opening of the financial market to the so-called “third party providers” (TPP) and allowing them to enter areas hitherto reserved for banks, such as access to bank accounts of their customers. Some observers believe that the directive entails a number of threats which will have a negative impact on the market and customers themselves. Is there really anything to be afraid of?

Krzysztof Przybysz from LOANDO Group (owner of Loando.pl and pozyczkaportal.pl), explained: The PSD2 includes a number of provisions that enable to create a level playing field between third parties and issuers of ATM and credit cards. Banks and TPPs will have to allow the customer to obtain a chargeback in case of an unwanted money transfer. In such transactions, card operators will be the intermediaries. The possibility of obtaining a commission will compensate for the loss of some that the intermediaries incur in the transfers.

– The threat posed by GAFA is not particularly real for Polish banks and domestic entities offering financial services. The entry into force of PSD2 will not cause any major and too dynamic changes in the structure of the market. Building dominance even by such giants as Facebook or Google will not happen in the coming months. The gradual rise of the GAFA monopoly, which bankers are currently so afraid of, may be stopped by closer cooperation with fintechs that will provide them with innovative instruments, operational know-how or even enhanced UX – convinces Krzysztof Przybysz.

– PSD2 directive and the strong customer authentication requirement will prevent external suppliers from claiming to be account holders. This data security measure will protect users from unwanted profiling and analysing their purchasing decisions or the way they use financing products. Technically, a return of screen scraping in its old form, the one rejected by the Polish Financial Supervision Authority, is not possible – confirmed LOANDO Group CEO.